Posted by boldkevin on March 25, 2013 in Polls and Surveys

As promised I have now closed the Getting Help Survey which we launched some weeks back now. 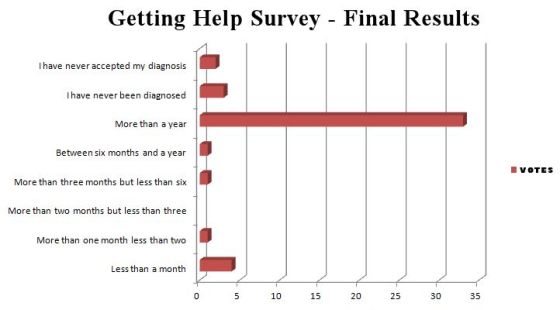 Interestingly, and very sadly, some 33 voters out of the 45 total voters sad it took over a year before they got an acceptable diagnosis in respect of their mental health.  That equates to some 73.3% of those voting.

This means that quick and acceptable help was not received by over 84% of those voting.

Other figures were that:

One voter said it took more than one month but less than two months.

One voter said it took more than three months but less than six months.

One voter said it took more than six months but less than  a year.

Thankfully 4 voters stated that they did indeed get an acceptable diagnosis within one month of seeking help for their mental health.

I am extremely aware that this is a very small poll when you consider the amount of people suffering with mental health related challenges and who have actually sought help.  But I can’t help wondering just how indicative this is and why it is this way?

← Getting Help Survey – Closing This Week!
Apologies For My Recent Absence →